SFX ran a competition to write a zombie story. It could be anything as long as it was about zombies.

It was: Brand New, In Box by James “JC” McFetridge. I read this wanting to hate it, but annoyingly it’s really good. A deserved winner…

There were 4 runners up. They weren’t me either.

Sushi by George Hopkin
A Mother’s Love by KV Morgan
Out Beyond The Naughty Step by Paul Starkey
The Small Print by Anonymous??

I haven’t had the opportunity to read any of these, so I’ll continue to dislike them.

If you’d like to read my entry, here it is. It’s a zombie story, so it’s a bit gruesome, but nothing too graphic… 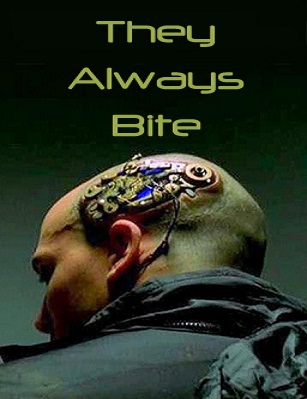 The zombies ignored Dr Shannara when he stepped amongst them, but he couldn’t ignore them. Even with the help of his bio-implant his heart was beating so hard his lab coat flickered over his chest. It always did when he had to physically inspect the undead.

He looked up to the rafters, checking again that the snipers were paying attention. One of them gave him a thumbs-up without taking his eye away from his rifle’s sights.

The nearest zombie had probably once been a woman, but years of constant drudgery and absolute mental incompetence had turned it into a shambolic scarecrow. One arm had been severed above the elbow, and a yawning hole ran down its cheek revealing broken teeth and dusty bone.

Dr Shannara examined the bulky metal implant that protruded from the zombie’s temple for any signs of damage. And then quickly analysed the virtual data stream that flowed in and out of it. Everything came up green.

He moved on to the second zombie. This one was fresher, some of its bodily fluids still oozing. In many ways this was worse than the desiccated corpse, its relative humanity exaggerating its grotesque obscenity. Again, this one’s implant was functioning perfectly.

And then, as he started towards the next zombie, an arm from one of the brutal pressing machines, shrieked, much louder than the moan of a thousand zombies. Slow as a whip, wrenched over and smashed into the machine next to it. There was an explosion of shrapnel.

Dr Shannara saw it happen in instances. Twisted steel and nuts and cogs bloomed out from the impact, a snapshot of symmetry. Then an image of chaos as the metal ripped into dead bodies standing around it.

There was very little blood. Dried flesh, like beef jerky, splintered off limbs and torsos.

A large rod skewered one zombie directly through the eye socket. That one toppled to the floor. Headshot.

The machine whirred to a jerking halt, and the bits and pieces it had spewed across the factory floor ricocheted into silence.

Dr Shannara’s heart yammered away like a steam engine, matched by his ragged breathing. He’d stumbled backwards onto the floor and, miraculously, he seemed unharmed. He frantically patted at himself, trying to ascertain if there was anything missing, anything shock was hiding from him. But he seemed intact, whole.

The surviving zombies were continuing their tasks as if nothing had happened. Or trying to, at least. One of them had lost its functioning arm and was now using its mouth to pull the required levers.

Not for the first time, Dr Shannara wondered at the terrible control of the zombie implants.

A dry gasp wrenched his attention around. One of them was stumbling towards him, almost running. Its mouth drooped open, and its hands were stretched out, reaching, grasping.

Dr Shannara tried to scramble backwards, but his muscles had seized with dread. This was his nightmare become real. This was the moment that had woken him in rigid terror in the dead of night.

The attacking zombie folded to its knees and placed its hands on the doctor’s shoulders. Its gaping, rancid mouth descended towards his face and Dr Shannara screamed. He saw, with ridiculous clarity how a piece of shrapnel had sheared the zombie’s implant clean off.

The zombie’s eyes were wild, darting around, searching for the best place to strike .

“Kill…” The zombie said and then its head exploded as a sniper’s bullet passed through.

Dr Shannara collapsed beneath the weight of the truly inanimate dead body.

When the guards came to retrieve him from the floor, Dr Shannara could only whimper. They shouted at him, trying to ascertain if he’d been bitten or ingested any blood or flesh.

The guards were wary of him. They muzzled him, attached a dog catcher’s noose around his neck and kept at least one assault rifle trained to his head.

After an hour he hadn’t shown any signs of zombification, but the guards took no chances. He was kept in a holding cell for another four hours.

Eventually someone who wasn’t a guard came to see him. His expensive suit, shoes and haircut marked him out as a lawyer.

Dr Shannara nodded at him through the shutter in the cell door.

Mr Ward looked at some papers he was holding. “How are you feeling?”

“A bit shaky.” Dr Shannara said. Then added quickly: “But I’m not infected. I’m going to be fine.”

Mr Ward nodded slowly, still reading the papers. “Yes. It appears so. But how are you feeling? Mentally.”

Dr Shannara tried to laugh. “I don’t know. I’ve never been so terrified.”

“You did sign a disclaimer when you accepted this position. The company cannot be held responsible for…”

Now Dr Shannara did laugh. It was relief. During the past few hours he’d convinced himself that he’d never be allowed out of the cell. The risk of further infection was too great. He would, at best, be kept confined for the rest of his life. At worst…

“Oh, I don’t think the company’s at fault.” The words tumbled out. “I’m just glad I didn’t get bitten. I thought I was a gonna…”

For the first time, Mr Ward looked at him properly. “We’re very glad you feel this way. Sometimes an encounter like this can lead to a lot of unpleasantness. And we don’t like to lose valuable employees.” Mr Ward smiled. It was a smooth expression, devoid of humour or warmth. “If you can sign this document, you’ll be allowed to go home.” He pushed the papers through the shutter.

Dr Shannara grabbed them. He skimmed over the legalese, understanding that he could never make any sort of claim against the company regarding the accident. But he didn’t care. An hour ago he would have made a deal with the actual devil, if it had meant he could go home. He was more than happy to sign away his legal right to compensation.

He pressed his thumb onto the proscribed place on the intellipaper.

The door unlocked automatically. He stepped out of the cell.

Mr Ward took the papers from him and shook his hand. His smile had not wavered, did not waver as he spoke.

“You get yourself home, doctor. Have a few days rest. You deserve it.”

He didn’t collect his briefcase from his office. All the way to the exit he felt a prickle down his back, expecting a guard to call his name or for the security shutters to come crashing down.

The air, when he got outside, had never tasted so sweet.

He decided to walk home, warmed against the fresh spring air by his euphoric sense of relief.

The reconstruction of the city was in full flow. Inside the gigantic construction cages, zombie workers carried tools and materials up the scaffolding, and then slid themselves back down the garbage chutes. They looked almost harmless in the daylight – very different to the rabid face that had attacked him.

As he walked he replayed the incident from his bio-implant recording. He slowed it down, and then froze it as the zombie’s ruined mouth opened to bite him.

And it hadn’t bitten him.

“They always bite.” Dr Shannara murmured to himself as he walked, engrossed in the replay.

He paused the image in his implant’s view just as the zombie had spoken. It was bringing its lips together to say another word.

Suddenly, Dr Shannara knew what that word would have been.

And then everything became clear.

The word had been “me”. The zombie had wanted to say: “Kill me.”

Dr Shannara reconstructed the sequence of events. The debris from the accident had smashed the zombie’s implant, rendering it useless. Then, moments later, the zombie’s original consciousness had woken up in the derelict body. Awareness rushed over it like acid. The pain would have been unbearable, and it had sought out the only recognisable human to beg for the agony to stop.

Was any of it true? Had there ever been a zombie outbreak? How deep did the conspiracy go? The questions fired around inside his mind, some of them picked up by his bio-implant.

He felt coldness flooding his body, as if his blood was being replaced by iced water. His heart stuttered to a halt. He looked around frantically, but everyone was backing away from him. There was a scream.

He heard the throb of a helicopter and saw black shapes rappelling down from the sky. He was surrounded. He lifted his arms in front of him and moaned: “Brains!”